Pop has been an avid Jeopardy viewer for yeaaaarrrssss. You best be sure at 7pm in NY and now 7:30pm in the DMV that he’s front and center.

I was delighted and so proud that while watching it with Pop last night, a Howard University question (Howard is EVERYWHERE!) was the final Jeopardy question.

“In 1939, turned down by 2 local theaters, Howard University was able to get an outdoor venue for this singer’s yearly concert.” Alex, Who is Marian Anderson (Jeopardy James is at it again.). https://youtu.be/G3EUGgTWwnQ

From the story and footage of the concert, regardless of all she endured during those times, Marian Anderson seemed to be a woman and beautiful singer of great dignity and pride. Being turned down by the DAR was poetic justice as Constitution Hall was not fit for a woman of such grace. And, at the Lincoln Memorial her audience stretched far and wide not just on those steps but through the airwaves. 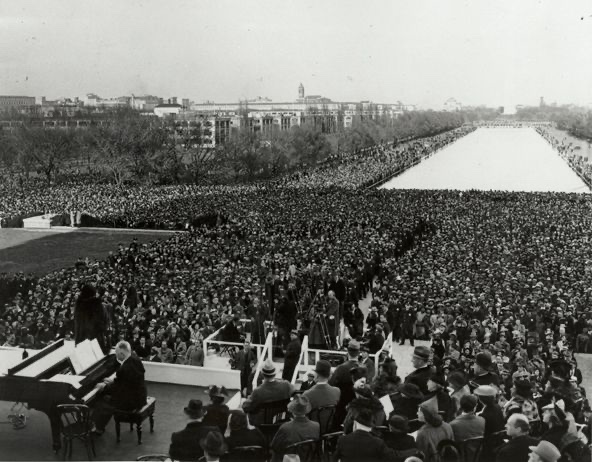 According to Wikipedia: “In 1939, the Daughters of the American Revolution (DAR) refused permission for Anderson to sing to an integrated audience in Constitution Hall in Washington, DC. The incident placed Anderson into the spotlight of the international community on a level unusual for a classical musician. With the aid of First Lady Eleanor Roosevelt and her husband Franklin D. Roosevelt, Anderson performed a critically acclaimed open-air concert on Easter Sunday, April 9, 1939, on the steps of the Lincoln Memorial in the capital. She sang before an integrated crowd of more than 75,000 people and a radio audience in the millions.” https://en.m.wikipedia.org/wiki/Marian_Anderson

Here’s a story and listen from NPR’s WAMU.

Thank you to our ancestor Marian Anderson for being you as an example of grace and dignity and for gifting the world with beautiful voice. Love!